The climates of Africa range from hot, wet tropical rain forests bordered by vast savannas to mountains, large deserts, and a mild Mediterranean climate found on both the southern and northern tips of the continent.

Many of the African plants I enjoy in my garden are hardy herbaceous perennials and bulbs, but those unable to tolerate even mild frosts are simply grown as annuals planted from seed, or as favored potted specimen to be brought indoors in the winter.

Some I would have a hard time doing without – coffee and cotton come to mind – while others are cultural staples; what kinda Southern cook would I be without blackeye peas, okra, or fig preserves?

Still others are ornamental mainstays, from outdoor flowers to cherished indoor potted plants. Most come with incredible stories, such as the African violet, “discovered” by European explorers in Tanga, east Africa, only in 1892 and smuggled from England to America as stolen leaf cuttings.

The following list – which I’ve compiled and tweaked for over thirty years, and represents a huge portion of my own garden – is incomplete, and includes some plants which are also native to the nearby Middle East and India. Still, it’s a good overview of the most commonly-planted landscape and garden plants which have been brought to America from the African continent.

Note: To keep it simple I’m generalizing here – not distinguishing between those from northern areas along the Mediterranean, sub-Saharan, or South Africa. Anyone really interested in more detail, contact me here.

Because these are generally cold sensitive they are typically grown for just one season, and replanted every year.

These herbaceous plants are able to live for several or more years, as long as nothing catastrophic happens to them. In some areas they may need temporary cold protection.

These generally long-lived plants may survive mild winters but are sensitive to freezes and are usually grown in containers and brought indoors in the winter. 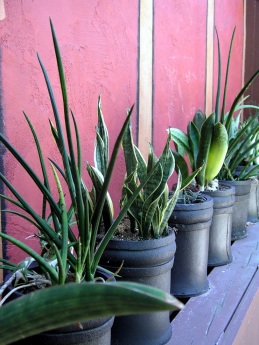 Durable Sansevieria comes in many forms 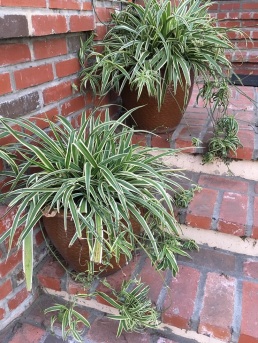 Interestingly, though there was a pretty good trade between Native Americans before Europeans entered the picture, a few important plants from South America came to North America by way of Africa. After being “discovered” by European explorers and taken to Caribbean Islands and back to Europe, they made their way to Africa where they rapidly became local staples.  Some of these South American natives – including peppers, peanut, cassava (tapioca), croton, bird of paradise, and some gingers – were then introduced to North America from Africa by sea-faring traders – including those brought along with enslaved Africans.

Main thing is, today’s American flower and food gardens wouldn’t be the same without these favorites from African continent. There are others, of course, but these are among the most widely-grown by gardeners all over the world.

This site uses Akismet to reduce spam. Learn how your comment data is processed.