NOBODY really knows who he is. Or much of anything about him, other than the whispered rumors that the Dos Equis guy – who is said to be the “most interesting man in the world” – wants him dead. Don’t know why he wears such an impeccably-tailored glow-in-the-dark suit and fedora. And even less is known about the even more enigmatic Senorita Misterioso – his sister perhaps?

I first found him alone on the second shelf of a dusty VooDoo shop hidden on a side street of New Orleans (true story). For years he stood on the dash above the steering wheel of my antique truck; one stormy night his glow-in-the-dark ability helped comfort and guide me and Dr. Dirt through a Texas deluge so heavy we couldn’t see the edge of the pavement.

When the old truck was temporarily stolen, he disappeared for awhile, along with our dashboard hula girl (a ceramic beauty I rescued from an antique shop in Hawai’i). They have made it back, and while she gyrates around America in the truck, he travels the world with me, occasionally coming out from his special pouch of my canvas murse.

With clasped hands and half-hidden smile, his stoic, contemplative, non-judgmental demeanor is immutable.

Oh – and have I mentioned that he glows eerily in the dark?

Other than claiming somewhat cheekily that “I’ve got Señor Misterioso in my pocket – at least for now” there’s really nothing more to say. Either you get it, or you don’t.

Scroll over these images to see where the iconic man has been sighted.

Visits remote towers in the moors of England 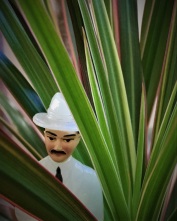 Still Dapper in the Jungle

Glows Eerily in the Dark 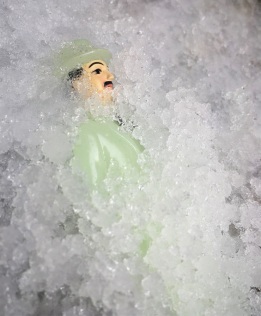 Really getting into a local Czech ale in Prague

ADDENDUM: Turns out, as I discovered after an alert follower shared a possible connection, that Señor Misterioso is actually based on a revered Venezuelan physician and popular folk figure, Dr. José Gregorio Hernández, who died in 1919 and  has been venerated by the Catholic church (and considered a candidate for sainthood. Striking resemblance, and there are many small statues of Dr. Hernández – including this small one –  which pretty much nails him as the original inspiration for Señor Misterioso…